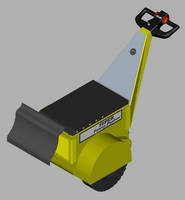 The Super Power Pusher has a New, More Ergonomic Handle

Shakopee, Minn.-NuStar, Inc. introduces the new and improved Super Power Pusher® pedestrian-operated, battery-powered pusher with a new handle. The Super Power Pusher(TM) is a significantly more powerful version of the standard Power Pusher®. It has the same ability to push, pull and maneuver virtually any heavy industrial load on wheels and uses its own modular range of attachments for handling rolling loads up to 150,000 lbs., or those with high rolling resistance.

The new ergonomically-designed, standard equipment handle encircles the hands for greater protection. This helps protect the operator when maneuvering a load or turning corners. The new handle has fingertip speed control and a built-in belly kill switch. Switching from forward to reverse and back again is also safer and easier. This new handle makes the Super Power Pusher smoother, safer and easier to operate.

About NuStar, Inc.
Headquartered in Shakopee, MN, NuStar, Inc. is a privately-held corporation specializing in the design, manufacture, marketing and sale of pedestrian-operated, battery-powered pushing and tug units for pushing, pulling and maneuvering an incredible range of wheeled and semi-wheeled loads. With over 23,000 units sold since 1964, we are ready to handle any type of material handling needs you have. For more information, visit: www.powerpusher.com.
Share