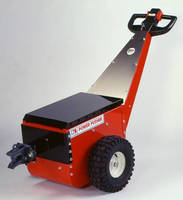 Operated by one pedestrian, Power Pusher runs on batteries and does not emit any harmful exhaust or fumes. Unit occupies footprint of less than 2 ydÂ² and does not require operator to be licensed in order to efficiently and safely push, pull, and maneuver wheeled loads up to 150,000 lb. Built in battery charger plugs into standard outlet, and available accessories/attachments include hitches, tow bars, strobe, motion beeper, and push plates.


Use a pusher that's energy efficient, clean, small, less expensive and easy to transport. Reduce your labor and time to move wheeled loads up to 150,000 lbs.

Shakopee, Minn.-NuStar, Inc. introduces the new and improved Power Pusher pedestrian-operated, battery-powered pusher. Unlike forklifts or other ride-on equipment, the Power Pusher runs on batteries so it does not consume $4 per gallon gasoline, diesel or propane; and, it does not emit any harmful exhaust or fumes. It is significantly less expensive than a forklift and operators do not need a license. It comes with a built in battery charger that plugs into a standard outlet. With a footprint less than two square yards, the Power Pusher is easily stored at a jobsite and is easy to transport from site to site. It's the perfect tool for those companies that want to be environmentally proactive. One person can use the nimble Power Pusher to efficiently and safely push, pull and maneuver wheeled loads up to 150,000 lbs., or those with high rolling resistance.

See applications of how the Power Pusher has solved material handling problems for our customers. View videos. The Power Pusher increases productivity by reducing the number of employees needed to move heavy objects. It also creates a safer work environment by reducing the risk of injury and by keeping the load under control.

About NuStar, Inc.
Headquartered in Shakopee, MN, NuStar, Inc. is a privately-held corporation specializing in the design, manufacture, marketing and sale of pedestrian-operated, battery-powered pushing and tug units for pushing, pulling and maneuvering an incredible range of wheeled and semi-wheeled loads. With over 23,000 units sold since 1964, we are ready to handle any type of material handling needs you have. For more information, visit: www.powerpusher.com.
Share