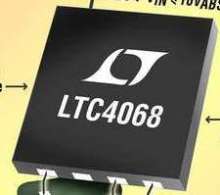 MILPITAS, CA - April 19, 2004 - Linear Technology Corporation introduces the LTC4068, a standalone linear single-cell Li-Ion Lithium Polymer battery charger that allows system designers to program charge cycle termination properly with a system load concurrently applied to the battery. In some cases, the system load demands so much current that the charge current termination threshold is never reached and the charge cycle continues indefinitely, overcharging the battery. Potential harmful effects of this condition are reduced battery life, thermal runaway and possible permanent damage to the cell. The LTC4068 eliminates these risks by enabling adjustment of the level of charge termination current relative to the amount of current needed by the system during battery charging.

With the use of a single resistor, charge termination current can be accurately set to a value less than, more than or equal to C/10. Moreover, the LTC4068 is equipped with a patented thermal regulation scheme, which maximizes charger rate without the risk of overheating. As a standalone charger, it features a charge current monitor, trickle charge for battery pre-conditioning, undervoltage lockout, automatic recharge, charge status indicator, and input voltage detection/indicator. Applications include PDAs, lightweight portable medical and test equipment and large color screen cell phones.

The LTC4068 is offered in a low profile (0.75mm) 3mm x 3mm DFN (lead-less) package. The total solution footprint is less than 25mm2 since an external MOSFET, sense resistor and blocking diode are not required. The LTC4068 can also charge a Li-Ion battery from a USB port. To preserve battery energy, the LTC4068 draws only 6uA from the battery terminal in standby and 2uA in shutdown mode. Furthermore, to ensure safety at turn on, the IC's soft-start function limits the inrush current. The LTC4068 is also equipped with a 1ms filter to ensure that transient loads created by switching regulators, for example, do not force premature charge cycle termination.

Programmable Charge Termination up to 950mA

Charges Directly from a USB Port