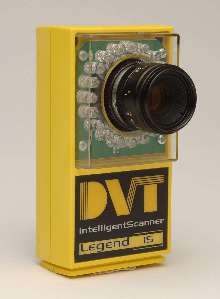 Powerful OCR feature achieves absolute accuracy even in less than ideal industrial environments. Character voids and blemishes, poor lighting and background inconsistencies present no problems for the versatile IntelligentScanner. Automatic identification and data capture by reading bar codes, Data Matrix and OCR characters to communicate coordinate information to motion control, SPC, HMI and PLC packages. In addition to supporting the older ECC code formats, the IntelligentScanner interprets popular code formats including ECC200, Interleaved 2-of-5, Code 3-of-9, Code 128 and the new General Motors code, PDF-417. To measure code quality or integrity, the IntelligentScanner outputs the number of errors in the code that the algorithm had to correct.

Headquartered in Norcross, GA, DVT Corporation ignited the machine vision revolution in the early 1990s with SmartImage Sensors and has continued to upgrade, enhance and integrate the technology into the most cost-effective vision systems in the industry. Starting at $2995, all SmartImage Sensors are Ethernet ready. Whether implemented as a simple, direct connection between the SmartImage Sensor and a computer, or as a connection that crosses the globe via the Internet, DVT exploits the Ethernet's architecture to bring real-time inspections and remote diagnostics to any aspect of a company's enterprise.