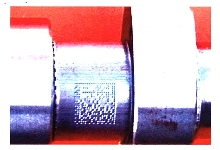 In addition, Borries has developed an optimized marking head for rendering complex Data Matrix marks. The head uses ultra fast components for marking speed. Further, a double-stylus head system has been created by Borries for use in alpha-numeric/Data Matrix marking, wherein one head is used for the D.M. encryption mark and the other is employed for marking standard characters. The device's controller runs both heads side-by-side, optimizing speed.

Control hardware for the dual-head mechanical marker consists of a double processor system, the two processors being connected via a serial interface. Real-time software used for stylus and scriber marking is equipped with a special add-on for matrix coding.

The overall size of the data matrix depends on the data content, which includes the number of characters to be encoded and the possible number of different characters. To emboss Data Matrix codes, the Borries equipment uses the same coordinate units as are used for stylus or scriber marking. A high level of consistency and reproducibility is achieved.

The Data Matrix technology is especially effective in reading laser marked matrices on metal and plastic pieces. The system's camera rapidly scans and verifies the metal part based on data contained in the matrix's coded marking.