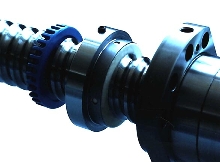 Bedford, MA, January 14, 2002 -- Steinmeyer, Inc. announced a significant addition to its standard line of wipers for precision ball screws. A new Combination Wiper effectively keeps contaminants from entering the ball nut while simultaneously lubricating the ball screw. "Most ball screw manufacturers just offer a non-contact plastic labyrinth wiper with clearance to the screw thread or a brush type wiper that contacts the thread with a few bristles," according to George Jaffe, Executive Vice President. "Neither is effective in preventing excessive coarse or fine grit from entering the ball nut. Steinmeyer offers the Combination Wiper, consisting of a friction type finger wiper in front of a felt wiper. The dual wipers, plastic plus felt, provide superior sealing. And because the felt is saturated with oil, it's really an optimum low maintenance solution for machine designers - dual wipers provide both improved sealing and constant lubrication." The wipers - plastic and felt - exactly conform to the thread profile providing dual wiping action. The felt doubles as a lubricant reservoir, maintaining a constant thin film of oil on the screw thread as the ball nut moves. And, because only a small amount of oil is deposited on the thread, ball screw oil consumption is significantly reduced, by over 75%. Since the felt can be replenished with a fresh supply of lubricant (either oil or liquid grease), the Combination Wiper has a significant advantage over the oil impregnated polymer version offered by other manufacturers. The Steinmeyer Combination Wiper is available in sizes from 16mm to 80mm in diameter.