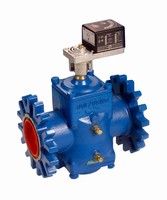 Developed by the company's home office in Denmark, the Total Authority Valve(TM) was designed especially for multi-circuit HVAC systems that typically include multiple fan coils, radiators and heat pumps. It can also be used in limiting the flow to individual heat exchangers or domestic water tanks.

"We call this the Total Authority Valve(TM) in the Americas because it has total authority over the flow into crucial components of a commercial HVAC system," explained Howard Rozendal, manager of FlowCon Americas' Charlotte headquarters. "It keeps the flow rate constant regardless of fluctuations in pressure or temperature, and instantly compensates for pressure fluctuations caused by other valves in the system opening or closing. It also helps maintain a constant temperature so that the entire system works at optimum efficiency.

"Because the FlowCon Total Authority Valves(TM) are externally adjustable, the desired maximum flow rate can be easily changed while the system is operating," Rozendal added. "This does not require the system to be shut down or rebuilt to replace a control valve, again saving time and money for the owner."

Other key features of the valve include:
o 51 distinct flow rate settings per valve size and control range
o Accuracy: Up to 99.8% accurate in a system wide application
o Tamper-proof, because the adjustment control is operated by means of a special FlowCon key
o Pressure and temperature measurement plugs available for verifying operating pressure differential range.
o Double union end connection with a wide selection of end fittings, or double flange connection for ease of installation.

FlowCon was founded in 1987 with headquarters in Denmark. It also has offices in Singapore and Dubai. The company is 100 percent focused on dynamic flow regulation and pressure independent temperature control. Details at international.flowcon.com (on the website the product is called by its European name, FlowCon SM). FlowCon Americas is available at 704-599-4700.
Share