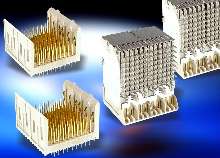 SANTA ANA, CA (November 20, 2003) - New from ITT Industries, Cannon. The Tempus(TM)-HS 4000 2mm backplane connector delivers increased bandwidth and reduced crosstalk. Designed for high-speed systems such as Serial-ATAII, the connector series is produced under license from FCI, and is the only second-source, drop-in replacement for FCI's HS4000 products.

"Today's telecom and datacom designs are being developed with signal speeds that require connectors to be considered part of the transmission line structure," comments product manager, Dennis Upperman. "Only a few years ago the connector was small enough in comparison to the signal length that it could be considered a DC connection. Now device signals are fast enough that the entire transition length can be shorter than the connector. Systems such as Serial ATAII are now being designed that utilize the Tempus-HS 4000 series as well as other systems that are designed to carry signals beyond 5Gb/s."

The Tempus 4000-series connector is designed as a 100 ohm differential pair signal transmission line environment. The 4000-series has been demonstrated capable of 10Gb/s signals in a large backplane environment.

HS 4000 connectors are end-to-end stackable with other Tempus products and are intermateable with Tempus HS 1000/2000 products, providing cost effective flexibility and scalability. Devices are available in 8 and 5-row standard and wide body versions. Durability is 200 cycles. Depending on the configuration and plating specified, prices range from $0.16 to $0.20 per mated line with typical lead-times from 6-8 weeks.