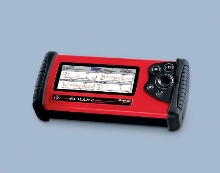 Bundle Adds Additional Coverage for Vehicles Back to 1996

San Jose, CA and Lincolnshire, Ill., March 28, 2005 - The best just got better with the launch of Snap-on Diagnostics' new software bundle 5.2 for MODIS, SOLUS and the Snap-on Scanner. After listening to the needs and requests of Snap-on Diagnostics users, Snap-on produced the new software bundle 5.2 to include the latest 2004 vehicle models - including Ford Controller Area Network (CAN) systems - and additional
coverage for the most-requested models dating back to 1996.

In addition to the enhanced CAN coverage for late-model Ford engine and transmission systems, available with the existing adapter on MODIS and SOLUS and with the optional CAN adapter on the Heritage and Color Graphing Scanner, the new software bundle offers a wide variety of coverage for other vehicle makes and models, including:

The software includes the latest Domestic Driveability Troubleshooter, featuring new code tips that retrieve existing codes and embedded data within the information where necessary. It also has new code set conditions, more symptom-based tests written by ASE-certified and factory technicians, built-in tests and procedures that decipher thousands of functional and actuator tests and the Fast-Track data scan tips, which provide descriptions for the OEM-specific parameters and allow live data readings to appear right on the screen. Snap-on also has updated the technical assistance section where technicians can find an updated list of Technicians Service Bulletins (TSBs) and other vehicle or system-specific insight.

MODIS and SOLUS users will gain an additional feature with the software bundle 5.2 that expands their ability to catch scan data glitches. While in graphing mode, technicians can set maximum and minimum thresholds. If the values are exceeded, the data will pause automatically based on user preference or when manually prompted. The new system gives technicians access to 512 frames of data for every parameter, allowing the technician to pinpoint the first parameter that went out of its normal range.

MODIS users also gain new 2003 component tests, support for PCLink and support for USB printing with the new software bundle 5.2. Users have access to a wide range of printers using a USB cable, or they can wirelessly save, view and print all saved data and custom presets with PCLink.

Customers can find out more about the Software Bundle 5.2 by contacting their local Snap-on representative, visiting www.snapondiag.com or calling toll free 877-762-7662.

Snap-on Diagnostics is part of Snap-on Incorporated, a leading global developer, manufacturer and marketer of tool and equipment solutions for professional tool users. Product lines include hand and power tools, diagnostics and shop equipment, tool storage products, diagnostics software and other solutions for transportation service, industrial, government, education, agricultural and other commercial applications, including construction and electrical. Products are sold through its franchisee dealer vans, distributor channels and company direct sales, including snapon.com. Founded in 1920, Snap-on is a $2+ billion, S&P 500 company headquartered in Kenosha, Wis., and employs approximately 12,000 worldwide.