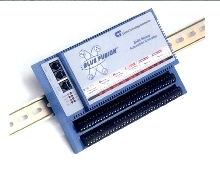 Web enabled 5100 Series Blue Fusion controller supports IT and Web standards, including HTTP, XML, SOAP, and SMTP, providing direct read/write access to industrial data from desktop browsers. With its built-in 10/100 Base T Ethernet port, controller can be connected to Internet and/or existing intranets. DIN rail mountable controller has high-speed digital and analog I/O and high-performance servo and stepper motor controls for up to 6-1/2 axes.

"With its built-in 10/100 Base T Ethernet port, the 5100 can be directly connected to the Internet and/or existing intranets, providing instant enterprise to device connectivity," explains Tom Schermerhorn, CTC VP of Engineering. "Blue Fusion eliminates the need for expensive and difficult to maintain middleware by enabling enterprise servers and Internet browsers to query the controllers directly via our secure XML interface."

The 5100 incorporates many of CTC's most popular rack mount controller features, such as high-speed digital/analog I/O and high-performance servo and stepper motor control, into a compact DIN rail mountable controller. Its small size and integral pluggable terminal blocks make it ideal for use in space-constrained applications. The 5100 features six user-configurable module bays that can accommodate CTC digital, analog and motion modules. Each 5100 can accommodate up to 50 I/O points and up to 6-1/2 axes of stepper or servo motor control. In addition to the Ethernet port, there are two high- speed serial ports for HMIs, programming interface or other serial devices. Programming is accomplished via Quickstep, CTC's popular step-based language that enables users to create programs modularly using simple flow-charting techniques.