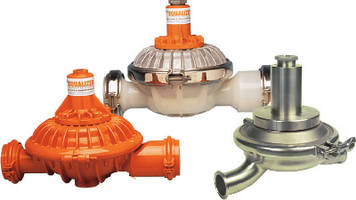 
Grand Terrace, CA - Wilden®, the worldwide leader in air-operated double-diaphragm (AODD) pump technology, has announced that it has designed its SD Series Equalizer® Automatic Surge Dampener to remove pressure variations on the discharge side of an AODD pump. This makes the SD Equalizer a common component in paints and coating's operations where changes in pumping pressures and flow rates, as well as product viscosities are a constant challenge for plant managers.

All reciprocating pumps experience a pressure fluctuation. However, the SD Equalizer minimizes that unwanted pressure fluctuation by providing a supplementary pumping action. A compressed air line that is attached to the body of the air regulator sets and maintains the pressure on the air side of the diaphragm. As the pump begins its stroke, liquid discharge pressure increases, which flexes the SD Equalizer diaphragm inward and toward the air side. This action allows fluid to accumulate in the liquid chamber. When the pump redirects its motion upon stroke completion, the liquid discharge pressure decreases, allowing the Equalizer diaphragm to flex outward, displacing the fluid into the discharge line. This motion delivers the supplementary pumping action that is needed to minimize unwanted pressure fluctuations.

For more information on any of Wilden's AODD pump products or accessories, please go to www.wildenpump.com. Wilden is an operating company within Dover Corporation's Pump Solutions Group (PSG(TM)). For more on PSG, please go to www.pumpsg.com.

Jim Wilden, founder of Wilden Pump and Engineering Co., revolutionized the pumping industry when he invented the air-operated double-diaphragm pump in 1955. Since then, Wilden has created a line of distinctive pumps that have proven to be trustworthy solutions to pumping applications in a wide variety of industries. Wilden-headquartered in Grand Terrace, California, USA-is a member of Dover Corporation's Pump Solutions Group (PSG(TM)).
Share