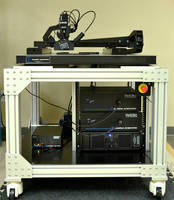 A proprietary design eliminates backside interference and allows manufacturers to perform non-destructive, single-sided inspection on display glass and polished, transmissive elements as thin as 0.5 mm. Designed for quality assurance, R&D and production environments, the systems capture complete spectral reflectance data for entire panels with the push of a button.

Gamma Scientific will be performing live demonstrations of their Automated Reflectometers in Booth 1030 at SID Display Week in San Diego, California from June 3-5, 2014.