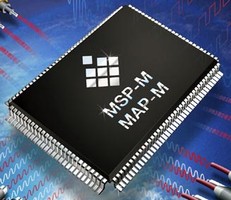 Micronas' MSP-M/MAP-M are all-in-one TV audio processors, which feature both Dolby Virtual Speaker and Dolby Pro Logic® II technologies. Designed for mid-range to high-end televisions, the chips can be included in flat-panel, projection or traditional CRT TVs. Micronas expects to see the first confirmations of installations of MSP-M/MAP-M sound processors into televisions as early as the second quarter of calendar year 2006.

Dolby Virtual Speaker uses room modeling techniques to create the illusion of five speakers when in reality only two are present, an approach that sets it apart from other virtualizers. Dolby Virtual Speaker is an ideal feature for flat-panel televisions, which are sold on their sleek looks, space-saving qualities, and superior visual performance when compared to traditional CRT screens.

Sales of flat-panel screens are predicted to rise from 9.98 million unit sales in North America, Japan and Europe in 2004 to 61.16 million unit sales in the same territories by 2009 (Television Display Market Report Worldwide, October 2005, from Understanding & Solutions, an international research firm).

"This is the world's first TV-specific audio solution to feature Dolby Virtual Speaker, which we believe allows the television to perform at a level of real home-cinema quality," said Stefan Hepp, director marketing consumer audio, Micronas. "The new Micronas audio system-on-chip presents TV manufacturers with the widest choice of audio technologies. By adding Dolby Virtual Speaker to our family, we can offer the additional advantages of consumer demand and third-party brand value."

"Dolby Virtual Speaker is ideal for an introduction to surround sound. This technology offers consumers the illusion of a five speaker surround sound system from just two speakers. However, up until now it has only been available in selected PC software and some A/V and home theater systems," said Tony Spath, vice president, international marketing, Dolby Laboratories. "Bringing Dolby Virtual Speaker direct to televisions will allow many more consumers to experience the excitement of surround sound, regardless of the source of the content."

The Micronas audio processor IC family has two products, the MSP-M, designed for TVs receiving analog-only or mixed analog-digital broadcasts, and the MAP-M, designed for TVs receiving digital broadcasts only. The processors are flexible, equipping the television with all the basic audio features required while offering the differentiating feature of innovative audio technologies such as Dolby Virtual Speaker. Micronas can also include company-specific intellectual property in these chipsets if required. Both processors offer high-end performance, are pin and software compatible, and come with all analog and digital audio interfaces needed in a modern TV design.