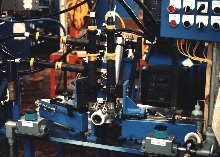 Fully automated tube nut assembly system simultaneously operates 4 slide mounted electronic nut runners that travel on and off tube nuts on command from computer, which controls operation and records torquing data to disc. System uses clutching socket end effector designed to travel straight on and straight off from side of any nut eliminating tedious task of positioning tool on tube nut.

Wilson Aerospace, LLC announces its fully automated tube nut assembly system, shown in the photo assembling tube nuts on an automobile component. The system shown here simultaneously
operates four slide mounted electronic nut runners that travel on and off the tube nuts on command from a computer that controls the whole operation and records the torquing data to
disc.

The threading down and torquing of the nuts takes about three seconds. The operator actuates the system by passing their hands over two proximity switches, positioned to assure that the
operator's hands are clear of any moving parts, signaling the computer to take over the tube nut assembly process. Then, the slides move the nut runners into position. Sensing that the nut
runner is properly positioned, the computer sends a command to the nut runner to spin down the nuts and set the desired end toque, or azimuth angle as may be desired. Finishing up, the nut
runners automatically retract along their positioning slides and the computer logs all data to disc. It's all done - automatically.

The system makes use of a patented clutching socket end effector designed to travel straight on and straight off from the side of any nut eliminating the tedious task of positioning a tool on the
tube nut. Originally developed for the Astronauts to work on the International Space Station, the clutch socket operates with spring loaded jaws that open and close around the hex nuts so that the clutch sockets push straight onto the nut greatly simplifying the process and allowing for automation of the entire system.

Some of the principal advantages of the automated system includes; speeding assembly operations, reduction in damaged materials and reworks, accurate and repeatable end torques
typically to within + or - 5%, a complete data log of all work done, and a huge reduction in operator repetitive motions that cause such diseases as Carpel Tunnel Syndrome. Also, the clutch
sockets provide a means of working on fittings in tight or otherwise unaccessible areas found in many manufacturing applications.