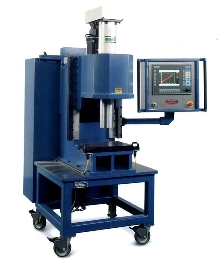 Servo controlled, ball screw assembly press and measuring system can be used for production, off-line testing, lab development work, and training and back up. It has built-in on-board force and distance sensors, plus encoder-equipped servo motor, so it can simultaneously monitor and control force and position. It can press to force/position, then test parts such as springs, check valves, shock absorbers, anti-lock brakes and oxygen sensors.

The machine is designed for a variety of uses, including production, off line testing, lab development work, and training and back up.

Typical applications include a wide variety of multi-press demands, such as press to force/position and part testing, all at the same station. Springs, check valves, shock absorbers, anti-lock brakes, oxygen sensors and fluid measurements -- where force relative to position is critical -- fit this category.

The new machine's electro-mechanical press has built-in, on-board force and distance sensors. It uses an encoder-equipped servo motor to drive a ball-screw ram that has the intelligence to take in a variety of signals from external sensors and gages.

This brings the same kind of closed-loop precision and repeatability to press- assembly operations that CNC machine tools bring to metalcutting operations.

The assembly press's ability to simultaneously monitor and control both force and position -- and take in other external sensor information as well -- enables new strategies which promise to change quality assurance from reactive to an in-process, proactive concept.

The electro-mechanical assembly press operates on easy-to-use Promess software (faster than Windows and other software programs)and features a graphical user interface for quick set-up or change-overs. The system includes integrated sensing and indicators that can be operated with the push of a button or the click of a mouse.