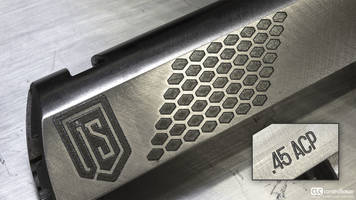 ArmsMark™ Engraving Machines are used to deep engrave into gun metals and creates permanent black or colored marks on blade steels. Compliant to ATF and NFA standards, units can expand up to 48 in. by using Mark-and-Move™ option. Machines come with camera, external monitor and tower light on the system for viewing the operation of laser and can engrave ATF and NFA serial marks in less than 20 sec on gun barrels.

For over 43-years, Control Laser has been at the forefront of laser engraving technology for the firearms industry and now they have a new standard product line of machines optimized for just this purpose. The Tactical ArmsMark™ laser engraving machines and marking systems can deep engrave into all gun metals and can create permanent black or colored marks on blade steels, and other alloys and tactical gear. One system configuration will engrave ATF and NFA compliant serial marks on gun barrels in under 20-seconds.

Tom Myers, vice president of Control Laser, says of the Tactical ArmsMark™ line: “We found that the firearms and knife industries have a huge demand for customized tactical gear and specialized laser engraving systems. Our ATF and NFA compliant engravers have been optimized for better cycle time, and we've added a Mark-and-Move™ option, and a Lase-and-View™ standard feature, that sets our systems apart.”

In the past, the lase field was limited to the field size of the lens. This arrangement limited the number of parts that could be lased on per lasing cycle. With the Mark-and-Move™ option, they expand that field size up to 48-inches, which means that more parts can be loaded per lasing cycle, thus higher production throughput. Keeping the same lens configuration as before means that the marks are just as precise as Control Laser has been known for, for years.

The Lase-and-View™ feature comes standard on all Tactical ArmsMark™ laser engraving systems. With Lase-and-View™ a camera and external monitor are added to the system which shows exactly what's going on inside the laser, without having to open the door.

When combining the Mark-and-Move™ option with the standard Lase-and-View™ feature, an operator can load up the system with parts and then go off to work on another system during the lasing cycle while keeping an eye on what is happening inside the laser from across the shop. A tower light on top of the system indicates when the cycle is complete.

Overall, the Tactical ArmsMark™ laser engravers are optimized for high precision, and high productionminded shops and manufacturers. Contact Control Laser today or visit the website for more information on these systems https://www.controllaser.com/ads/tam-press-release/.