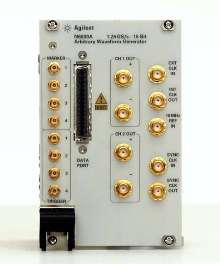 Module is System-Ready, Easy to Use for DSP, RF/Microwave Engineers

"Until now, commercial AWGs offered either wide bandwidth or wide dynamic range," said Pat Byrne, vice president and general manager of Agilent's RF and Microwave Communications Business Unit. "The N6030A offers both simultaneously, eliminating performance tradeoffs. It provides the widest combination of bandwidth and dynamic range commercially available. Over the past three years, we've invested heavily in research and technology development. The wide bandwidth AWG is another example of our continued commitment to commercializing innovative technology."

"Whether you are talking 1.25 GSa/s sample bandwidth to a DSP engineer or 1 GHz IQ wide bandwidth to the RF/microwave engineer, this AWG offers unprecedented performance," said Steve Fossi, general manager of Agilent's Defense, Aerospace & Transportation Solutions Division. "In addition, each channel can output waveforms as an IF or as a baseband signal for IQ upconversion."

The Agilent N6030A has 8 MSa or 16 MSa optional waveform memory for storage of arbitrary and complex waveforms, which is up to four times the memory available today from other wideband AWGs. Additionally, the advanced sequencing engine extends the effective size of the on-board memory.

System Scalability
With its four-slot 3U CompactPCI format, the Agilent N6030A can be used as a standalone AWG or as a scalable system component for generating complex phase-coherent, multi-emitter scenarios. A single module can drive eight total modules to create synchronous operation on a sample-by-sample basis. Multiple programmatic interfaces are included to speed waveform development and system integration, including MATLAB®, LabView, IVI-C and Microsoft®.NET framework. The Agilent N6030A includes a complete software suite with an intuitive graphical user interface that aids developers in waveform file creation, transfer and control of all module settings.

About Agilent Technologies
Agilent Technologies Inc. (NYSE: A) is a global technology leader in communications, electronics, life sciences and chemical analysis. The company's 28,000 employees serve customers in more than 110 countries. Agilent had net revenue of $6.1 billion in fiscal year 2003. Information about Agilent is available on the Web at www.agilent.com.

The Importance of Wideband Arbitrary Waveform Generators
Arbitrary waveform generators (AWG) are signal sources that derive their analog outputs directly from digital information. Those AWGs capable of generating instantaneous bandwidths more than a few hundred MHz are generally considered wideband AWGs, compared to more general purpose AWGs offering analog bandwidths only in the tens of MHz. The wideband AWG's ability to generate arbitrary signals is important in aerospace and defense and emerging communications where a wide range of signal formats are used. Many of these are either proprietary or do not comply with any accepted commercial standard.

The Wideband Challenge: Bandwidth and Dynamic Range
Wideband AWGs are used increasingly to simulate signal scenarios for receiver testing and transmitter upconversion blocks. The fundamental challenge designers face, however, has been the choice of the AWG's bandwidth or dynamic range. They simply are not able to achieve both, simultaneously, because digital to analog converters (DAC) used inside most commercial AWGs offer either high sample rates (bandwidth) or high bit resolution (dynamic range). This issue forces designers to add extra signal conditioning elements to their wideband designs to remove the distortion products caused by the AWG. Alternately, designers can purchase higher performing DACs and build-up AWG capabilities needed for their specific design. This latter approach is frequently used in the evaluation of high performance military systems like radar, electronic warfare (EW) and secure communications, but requires the designer to allocate extra resources building test equipment instead of focusing on the more value-added design elements of the project. Developing custom AWGs is also counter to the military's move toward greater reliance on commercial off-the-shelf (COTS) equipment.

The N6030A is a high-performance AWG that provides engineers with both wide bandwidth and wide dynamic range, simultaneously. Its dual, differential output channels operate at 1.25 gigasamples per second and offer 15 bits of resolution giving engineers 500 MHz of instantaneous analog bandwidth and more than 70 dB of spurious-free dynamic range in each channel. When combined with a high-performance vector signal generator, IQ bandwidths of 1000 MHz can be achieved at microwave frequencies.

Radar Signal Simulation
Modern radar and EW systems utilize pulse compression techniques to maximize both radar range and target resolution. The benefit of pulse compression is that it allows the radar to identify and classify enemy threats sooner compared to legacy systems. Bandwidths for such pulse compressed or "chirp" radars routinely exceed 300 MHz and can extend into the GHz range. AWGs used to test these radar receivers must not only have the required wideband capability, but also be capable of generating clean, low-distortion signals so as not to introduce false targets (spurs) into the radar receiver.

Wideband AWGs are also used to test upconversion blocks of the radar/EW transmitter. Especially important is that the AWG possesses a two-channel architecture when used as the system's baseband generator (exciter) to create the in-phase (I) and quadrature (Q) signal components.

Frequency Agile Radios
Many military and commercial radios employ complex modulation schemes that hop their carrier frequencies. Where commercial radios often hop to improve spectral efficiency, military radios utilize frequency agility to improve communication security (low probability of intercept). In both cases, test waveforms are required to modulate and/or hop the modulated signal across a wide bandwidth. One such example is the Link-16 tactical radios used by the United States Navy, the Joint Services, and forces of the North Atlantic Treaty Organization (NATO). Though the actual modulated carrier is only a few MHz wide, it is dynamically hopped across 255 MHz of frequency spectrum. New radio designs based on the Wideband Networking Waveform (WNW) format have even wider hop bandwidths. Another example where test signals are required to test frequency agile radios is the IEEE 802.15.3a Ultra Wideband (UWB) format. One implementation includes hopping a 528 MHz wide signal across three adjacent channels.

In either case, engineers use wideband AWGs to encode, modulate and hop waveforms during the test and evaluation of their new transceiver designs. As in the case of radar and EW, signal distortions in the AWG output make it challenging for the designer to discriminate between distortions in the design and those generated by the AWG.

Consolidated Assets
R&D labs looking to maximize usage of their capital equipment will often buy test equipment for a variety of design tasks. Wideband AWGs, by their very nature, have the ability to generate custom waveforms for both analog and digital designs. Wideband AWGs can generate data patterns for high-speed digital bus and signal integrity tests. They can also be used to generate standard waveforms like those found in traditional function generators. With a wideband AWG, one general purpose asset can be used to create all these signals.
Share