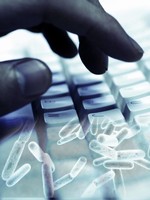 Supplied as solid crystalline powder or in masterbatch, BIOSAFEÂ® HM 4100 prevents staining and degradation caused by bacteria, mold, mildew, and fungi. Its structure is engineered to puncture and rupture cell walls, eliminating chance for microorganisms to mutate/adapt and become resistant to antimicrobial component. Achieving effective microbial reductions within 1-4 hr, nontoxic polymer will not migrate out of plastic or rub off surface and does not affect optical properties.

BIOSAFE® Renders Compounds Inherently Antimicrobial, Is More Cost-Effective and Faster-Acting than Silver-Based Additives, and Avoids Discoloration PITTSBURGH, PA, U.S.A., January 22, 2008: Patented polymer technology has yielded an altogether new type of antimicrobial that provides permanent protection at much less cost than conventional silver-based additives while eliminating common problems like discoloration, opacity, and concerns about heavy metals, it was announced by BIOSAFE, Inc. Tradenamed BIOSAFE®, the new antimicrobial protects plastics from staining and degradation caused by bacteria, mold, mildew, and fungi and does not compromise end-product safety by migrating out of the plastic or being rubbed off the surface, according to the company. The BIOSAFE additive does not compromise optical properties when used with high-clarity resins. When incorporated into plastics compounds, the BIOSAFE product adds $0.25 to $0.50 in raw material cost per pound of finished plastic product. By comparison, widely used conventional antimicrobials based on silver ion chemistry are usually incorporated at 1% levels and add $0.75 to $1.50 per pound of end product, making them much more expensive, according to Donald J. Wagner II, BIOSAFE vice president for business development. "BIOSAFE technology provides an environmentally sustainable means of prolonging the useful life of consumer and industrial products and addresses the growing demand among the healthcare community for hygienic cleanliness in medical products for hospitals and doctors' offices," said Wagner. "As a nontoxic polymer that renders plastic surfaces permanently antimicrobial, BIOSAFE eliminates the safety issues of leaching antimicrobials and does so while actually reducing the cost of effective end-product protection." BIOSAFE takes between one and four hours to achieve effective microbial reductions on plastic surfaces, noted Wagner. "This is considerably faster than the industry standard of a 24 hour test." The basic BIOSAFE product for use in plastics is HM 4100 Antimicrobial, which the company supplies as a solid crystalline powder or in a masterbatch. RTP Co., Winona, MN, produces the masterbatch for Biosafe. Also available are fillers, including hollow or solid glass microspheres, ground silica, or diatomaceous earth, that have been rendered antimicrobial through a BIOSAFE surface treatment. BIOSAFE products can be incorporated by standard mixing and compounding techniques. BIOSAFE products contain no volatile organic compounds, heavy metals, arsenic, or polychlorinated phenols. Toxicity tests have shown them to cause no irritation or sensitization in skin contact. BIOSAFE chemistry is FDA listed as a modifier to medical devices and has received its EPA label approval. Antimicrobial Permanently Protects Medical, Building, Electronic, Consumer Products The basic component in BIOSAFE products has long been used for protecting textiles from microbial growth but until now has been available only in a liquid solution that had no application in polymer processing. Drawing on organofunctional silane technology, BIOSAFE converted this material to a dry crystalline powder that is thermally stable for use in extrusion and injection molding. When mixed with any common resin and subjected to conventional thermoplastic processing, the BIOSAFE system blends within the base-resin polymer structure, rendering the resulting finished product permanently antimicrobial. The antimicrobial component of HM 4100 has a structure engineered to puncture and rupture cell walls. By comparison, conventional antimicrobials kill by leaching into the cell, where they are metabolized and interfere with critical life processes. This conventional mode of action has been shown to cause microorganisms to mutate and adapt, becoming resistant to the antimicrobial. BIOSAFE products avoid this problem. BIOSAFE products are expected to be used in a wide range of consumer and industrial applications where microorganisms can cause staining, pitting, deterioration, and odor. BIOSAFE, Inc. recommends its new products for solving special problems in these end uses: o Medical devices and surfaces in healthcare environments. The spread of infection in hospitals and the development of antibiotic-resistant strains of bacteria is nationally recognized as a critical healthcare problem, one that BIOSAFE antimicrobial can help solve through its use in catheters, wound dressings, and high-contact environmental surfaces such as door knobs and countertops. o Building products. The heat and moisture to which wallboard, flooring, roofing, decks, and other components are exposed promote the growth of molds and mildews. According to insurance industry estimates, mold-related damage to building products causes well over $2-billion in claims per year. o Electronic/human interfaces such as keyboards, ATM machines, and airport kiosks present special contamination problems. Microbial counts on computer keyboards can be more than 60 times higher than on toilet seats, averaging 3,300 bacteria per square inch. Public surfaces such as those of ATM machines present even greater possibilities for the product damaging microorganisms. BIOSAFE, INC. supplies antimicrobial products based on two awarded and two pending patents. The company's core product is BIOSAFE® HM4100 antimicrobial polymer. This is available in the form of a powder for mixing, compounding, and dispersing; can be surface-treated onto pigments and fillers, rendering them antimicrobial; and can be incorporated in water or solvent solutions at various concentrations. The surface-treated fillers can be custom-formulated for a range of technology platforms such as thermoplastic and thermoset resins, water- or solvent-based coatings, adhesives, or caulks. BIOSAFE also supports customers by carrying out antimicrobial testing. The company is headquartered at 100 Technology Drive, Suite 400, Pittsburgh, PA 15219. Tel: 1-412-770-1302. Email: dwagner@BIOSAFEinc.com. Visit www.BIOSAFEinc.com.