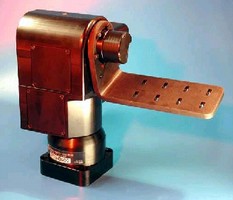 BURLINGAME, California. September 30, 2005 - Directed Perception, Inc. today announced the availability of its PTU-D300 family of computer controlled pan-tilt units. The PTU-D300 is designed to support a range of fixed and mobile antenna and communications laser positioning requirements for satellite tracking, microwave communications, and other surveillance and communications applications. The PTU-D300 offers a price/performance not previously available in off-the-shelf antenna positioners. The extremely rugged all-in-one design is compact and has flexible mounting options. Built-in dynamic control capabilities include on-the-fly speed and position command changes at over 30Hz supporting a wide range of applications including real-time tracking. A 360-degree continuous-pan option is available with pass-through of Microwave antenna signals. An available software API supports integration with custom applications. Geo-pointing and stabilizations options are available.

Speeds time-to-market for complex communications systems
The integrated design of the PTU-D300 provides a complete turn-key positioning solution for fast, accurate, dynamic, computer-controlled positioning of antenna position through a wide range of motion. Sensor and communications systems designers can save months of product development time by using the PTU-D300 as a complete, drop-in antenna positioning solution. Remote control of the PTU-D300 is provided through RS-232 or RS-485 serial interfaces with multiple software options.

The PTU-D300 includes a fully-integrated controller with digital commands for fine-grained control of speed, acceleration, position limits, and power modes. Unit can be commanded in terms of either position or velocity. The unit allows on-the-fly command changes to support dynamic tracking applications. Both Serial and Ethernet interfaces are available, with other network interfaces on request. Control software interfaces available include a LabView driver and a C source-code API for use with embedded or desktop CPUs.

Price and Availability
The PTU-D300 is available now. Pricing is $9500 in Quantity 1 (standard configuration).

About Directed Perception, Inc.
Directed Perception is a leading manufacturer of innovative devices and software for the intelligent control of sensors and sensor processing including video cameras, IR sensors, laser rangers, microwave antennas, thermo-imaging sensors, and more. The Company's products are designed with precision, ruggedness, and low-cost to support demanding applications, such as tracking, in a broad range of OEM and end-user markets. Directed Perception's flagship miniature computer-controlled pan-tilt tracking mount was one of the first of its kind and has been sold to OEMs and end-users world-wide since 1992. The Company's patented products are used in a wide range of industries including Security & Surveillance, Industrial Automation, Robotics, Communications, Military/Aerospace, Law Enforcement, Education, R&D, Webcams, and Teleconferencing/distance learning.

Directed Perception is privately held and headquartered in Burlingame, in Northern California.