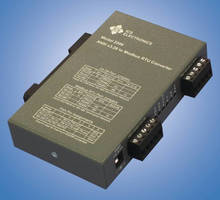 
PLEASANTON, CA. – Today ICS Electronics announced an updated ANSI x3.28 to Modbus RTU Converter for controlling RS-232 and RS-485 Modbus RTU devices. Called the Model 2399, this new converter was designed to simplify the replacement of obsolete ANSI Controllers with new Modbus RTU compatible Controllers.  Its firmware has been expanded to handle the Watlow XonXoff and the ANSI X3.28 protocol. The user only has to configure the 2399 with the ANSI commands used in his system and the equivalent registers in the new Modbus Controller. The 2399 is inserted in the serial path between the system computer and the replacement Modbus Controller so the system runs without any changes to the system software.

Many production and test systems were designed years ago with ANSI Controllers that are now obsolete and virtually impossible to repair.  Replacing the old Controllers with new Modbus equivalents has been impractical or too expensive up to now because the production system software would have to be modified to work with a Modbus compatible Controller. The 2399 makes the replacement possible without having to make any changes to the production system or to its software.

The 2399 has three operating modes.  In the x3.28 Mode, the 2399 appears as a ANSI X3.28 device. In the XonXoff mode, the 2399 appears as an XonXoff ANSI Device.  In both cases, all ANSI commands are converted into Modbus RTU packets and Modbus Controller responses are returned to the system computer.  In the SCPI Mode, the 2399 operates as serial interface, converting ASCII command strings into Modbus RTU packets for controlling Modbus devices from a serial source.

The 2399 is a small, metal enclosed  unit that can be DIN Rail or panel mounted.  It operates on 5 to 32 Vdc or from an included a 115 VAC power adapter. The 2399 has two serial ports that can be independently set as RS-232 single ended signals or as 2 or 4-wire, RS-485 differential signals. Port 1 is the computer interface port and is used for the ANSI X3.28 protocol communication, for the 2399 setup commands, and for controlling Modbus devices with simple ASCII commands.  Port 2 communicates with the Modbus RTU device(s).

ICS supplies a 2399SetTest utility program can be used to configure the 2399 and to switch the 2399 to either ANSI mode to test the user's ANSI commands with the new Modbus Controller.