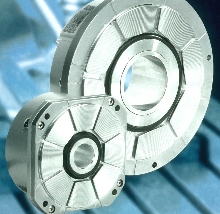 RON/RCN angle encoders feature recognizable outlet channels on flange and rear side to ensure that fluids cannot collect on encoder or seep inside housing. Signal processing electronics provide resolution up to 134 million position values (27 bits) per revolution. Encoders feature accuracy of better than Â± 5 in. and line count above 18,000. Applications include rotary tables and swivel heads on machine tools, telescopes or spectrometers.

HEIDENHAIN CORPORATION introduces its newly improved RON and RCN version angle encoders. Because of their dynamic accuracy, these encoders with their integral bearing and stator coupling are the preferred units for high-precision applications such as rotary tables and swivel heads on machine tools, telescopes or spectrometers.

The new sealing concept on the RON/RCN encoders and the clearly recognizable outlet channels on the flange and rear side of the encoder ensure that fluids cannot collect on the encoder, or, in a worst-case scenario, seep inside the encoder housing. The new integral stator coupling and the revised design of the angle encoders also contribute to the significantly improved dynamic rigidity.

The reduced weight and strict symmetric setup of the RON/RCN angle encoders result in a substantial increase in their natural frequencies. The new signal processing electronics for the absolute angle encoders raise the resolution to up to 134 million position values (27 bits) per revolution, and permit the output of the absolute position even at highest speeds.