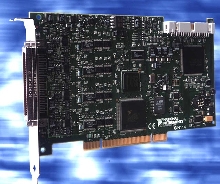 The NI PCI-6731 and NI PCI-6733 analog output modules come with NI-DAQT(TM) 6.9 driver software, a powerful programming interface for use with numerous programming environments and languages, including NI LabVIEW(TM) and LabWindows(TM)/CVI, and Microsoft Visual Basic and Visual C++.

Product and company names listed are trademarks or trade names of their respective companies.