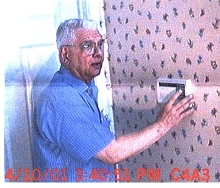 Version 7.1 Alarm Verification software displays archived photos of any person who arms or disarms burglar alarm system. This allows security guard to compare the stored photo and current video image side by side on the same video screen. The operator may select a detailed view of each picture and save pictures for use in a written report on the incident or included in e-mail to inform the authorities of any unauthorized uses of pass codes.

1. ALARM SITES may have MANY persons Authorized to Arm or Dis-Arm their Burglar Alarm Systems.

2. CENTRAL STATION OPERATORS may be monitoring HUNDREDS of Alarm Sites, which are processing Opening & Closing Reports and Alarm signals, for the Alarm systems.

3. CONSEQUENTLY IF the Central Station Operator is attempting ALARM VERIFICATION, he or she must be able to IDENTIFY the person who Armed or Dis-Armed the Burglar Alarm System.

4. THEREFORE, we are expecting this operator to RECOGNIZE HUNDREDS of persons OR, more importantly, we must have a method of IDENTIFYING AUTHORIZED persons at EACH site.

5. ADDITIONALLY, we must also assume that the Digital Capturing System even has pictures stored of WHO actually Armed or Dis-Armed the Burglar Alarm system or caused the alarm signal.

First INTELLIGENT SELECTION would Select, Capture and store Pictures of persons who Armed or Dis-Armed the Burglar Alarm system, because that person would be DETECTED by a PIR covering the Keypad location. This DETECTION would be routed to the INTELLIGENT SELECTION's PC, on Site, which will then Select the appropriate Camera, Capture and store a Picture of this Person on its TCP/IP database, according to the Computers Time/Date, the Camera and PIR/alarm number.

Second, when the Remote Site was installed and Setup, ALL Persons who would be Authorized to Arm or Dis-Arm the Burglar Alarm System would have their pictures taken with a Digital Hand Held still camera and then transferred or saved on a PC, as a Bitmap files. The Installer and Administrator would then install these pictures onto a TCP/IP database named "Burglar Alarm Persons ", etc. The Time/date of the storage, along with that persons ID CODE NUMBER and Pose number would be superimposed into the picture to assist the operators in the Identification. (Notice the "Code " C12459 ID number in the example picture included).

Now when an operator is attempting ALARM VERIFICATION, he/she could open this database from their remote site and by Sorting by the persons ID CODE NUMBER, retrieve a picture in less than 1 second from the TCP/IP database named "Burglar Alarm Persons ", etc. (See included picture).

NOW, when an operator receives an Opening or Closing Report from the burglar alarm system, and the report includes Identification Code information of the passcode used to Arm or Dis-Arm the System, the Operator will be able to easily find a picture of WHO actually Armed or Dis-Armed the system using an INTELLIGENT SELECTION Remote software screen AND based on the ID Code information in the report, easily find a picture of the person assigned the ID Code information, via ANOTHER INTELLIGENT SELECTION Remote Software Screen, BOTH of which are displayed SIMULTANEOUSLY on the Operators PC Screen.

With BOTH pictures being displayed, the operator may easily compare the two pictures to VERIFY that the person using the passcode is the same person assigned the passcode. The operator may select a "Detailed View " of each picture and using standard Windows screens, SA VE these pictures to a PC's Word Processing folder as Bitmap pictures. These Bitmap pictures may be included in a written report on the incident or included in e-mail to inform the proper authorities of any Un-Authorized uses of the Burglar Alarms assigned Passcodes.
Share