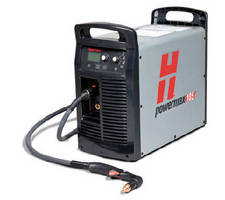 Offering 7 different torch options, 105 Amp Powermax105Â® is capable of cutting 1 Â¼ in. thick metal and severing metal up to 2 in. thick. Patented SmartSense(TM) technology automatically adjusts gas pressure according to cutting mode and torch lead length, and also detects when consumable have reached end of life, automatically turning off power to prevent potential damage to other parts or workpiece.


Hypertherm, a manufacturer of advanced cutting products, today announced the launch of the Powermax105®, a new 105 amp air plasma system for hand and automated cutting and gouging designed to comfortably cut 1 ¼ inch (32 mm) thick metal, and sever metal up to 2 inches (50 mm) thick.

Based on the same technology platform of the highly successful Powermax65 and Powermax85, the Powermax105 is the culmination of four years of research, engineering and testing to design the toughest, most versatile system in its class. The new system delivers:

· Seven different torch options-the most in the industry-for unparalleled cutting and gouging versatility, whether by hand, machine, or robot.

· Ease of use with simple controls and patented SmartSense(TM) technology that automatically adjusts gas pressure for better, more efficient cutting; and detects when consumables have reached end of life

"In addition to devoting an enormous amount of engineering resources to this new system, the associate owners at Hypertherm spent a lot of time on the road observing people who cut metal to better understand their needs," said Erik Brine, product marketing manager for Powermax systems. "We took that information and applied it to the Powermax105 to create a product that the most demanding customers of the world can rely on for metal cutting and gouging."

Hypertherm designs and manufactures advanced cutting products for use in a variety of industries such as shipbuilding, manufacturing, and automotive repair. Its product line includes handheld and mechanized plasma and laser systems, consumables, as well as CNC motion and height controls and CAM cutting software. Hypertherm systems are trusted for performance and reliability that results in increased productivity and profitability for tens of thousands of businesses. The New Hampshire based company's reputation for metal cutting innovation dates back more than 40 years, to 1968, with Hypertherm's invention of water injection plasma cutting. The associate owned company, consistently named one of the best places to work in America, has more than 1,200 associates along with operations and partner representation worldwide.
Share