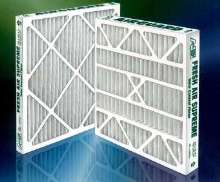 The media for the Fresh Air Supreme is self-supporting and doesn't require a metal backing to shape the pleats. A metal-free design simplifies disposal. Fresh Air Supreme filters are available in 2" and 4" thicknesses.