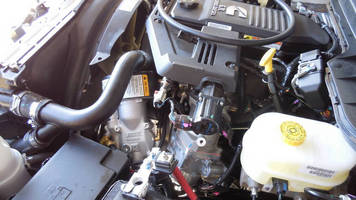 Model V900126 UNDERHOOD kit features air compressor for RAM trucks with Cummins engines, mounting near top of engine to simplify access and protect against environment. System provides up to 70 cfm. It includes Intelligent Digital Controls and turns truck off when air is not being used and on when air is needed.

Nanaimo, B.C. – With VMAC's latest UNDERHOOD (V900126)  kit going into production, dealers now have an opportunity to provide an UNDERHOOD air compressor for the latest model of RAM trucks with Cummins engines. In the last year 140,675 new RAM trucks were sold, and a large and growing base of very loyal customers have shown considerable interest in VMAC UNDERHOOD air compressors for their trucks. The new V900126 compressor is now mounted higher on the engine for easier access and greater protection from the environment.

VMAC UNDERHOOD compressors are reliable in the broadest range of conditions - including anywhere a truck can be driven and operated.  The new system provides the exceptional UNDERHOOD space and weight savings without a trailer and sparing the deck or service body space typically dedicated to an air compressor. The new system provides up to 70 CFM, ensuring the compact power for which VMAC is known.

The unit is proving to be popular, with exceptional pre-order demand for the kit. There have also been many pre-orders for the upcoming V90G126, featuring VMAC's state-of-the-art Intelligent Digital Controls. This advanced air compressor system is smart enough to turn the truck off when air is not being used and then turn the truck back on when air is needed again.