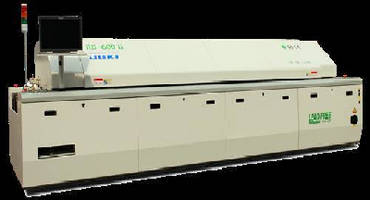 The RS-600 reflow ovens offer the same feature set as the larger 8- and 10-zone ovens, such as; a top and bottom Independent Air Velocity Controlling System that allows for flexible processing control to easily handle complicated lead-free soldering requirements, a four way air recycling system in each zone, and an efficient power design and air management system that greatly improves energy savings while lowering carbon emissions. In addition, as with the larger ovens, the 6-zone oven has a total heated length very similar to other ovens that are 7-, 8-, and even 9-zones.

As an added benefit, Juki is now including KIC AFP (Auto-Focus Power) as a standard feature on its line of reflow ovens.  AFP gives the 'Best First Guess' when setting up a new product. To set up the Juki oven for a new PCB, the technician simply inputs the PCB length, width, and weight and the AFP software will take it from there by using a built in library of profiles and oven specifications.  Once the information is provided AFP will suggest a recipe for the new PCB, reducing the need for profiling new products thus saving time and money.  The suggested oven recipe seeks to put the PCB profile in the sweet spot of the process.  In addition, the oven settings can lead to lower electricity use.  It does not matter which profiler you are already using but it is possible to grow the library using a KIC profiler (X5, SlimKIC 2000 and KIC Explorer). Juki is now a reseller for KIC products.

Juki Automation Systems, a global leader in high-speed SMT Assembly equipment, has shipped more than 27,000 machines worldwide since 1987.  Juki has built its global image with a combination of top-quality and high-reliability machines with a reputation for world-class service and support that result in the lowest production costs for its customers.  The pioneer of the modular assembly system in 1993, Juki offers flexible solutions designed for both high-volume and high mix environments.