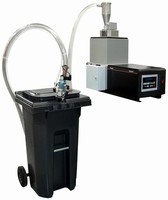 Operating on 20cfm at 50psi air pressure when feeding, the ADS1 is a self-contained adhesive delivery system that automatically draws and transfers adhesive to the tank hopper when the level falls to a pre-set minimum. Adhesive is drawn through a suction wand immersed in the adhesive bin and delivered under positive-pressure to the tank hopper. A vibrator installed on the wand keeps the adhesive flowing freely. A capacitive sensor immersed in the adhesive tank hopper senses a low level pre-set and responds by transmitting a signal to the DynaFill(TM) system to draw adhesive through the wand and transfer it to the hopper. When the hopper reaches the pre-set maximum adhesive level, the sensor discontinues the signal to the system to stop the transfer of adhesive.

The DynaFill(TM) system conveniently feeds a hot melt unit up to 22 feet vertically and 100 feet horizontally. Due to its positive-pressure self-contained design, the system minimizes contamination for improved performance and reduced equipment downtime.