The Hirschmann Automation and Control GmbH, Neckartenzlingen, is presenting the new WLAN System BAT 54 at the Hanover Fair 2006 (Hall 9, Stand F28). This system, which consists of the BAT 54 and the BAT 54M, can be used as an Access Point or Bridge for dual-band operation in accordance with IEEE 802.11a (5.15-5.825 GHz) and b/g (2.4-2.497 GHz). The range is more than 20 km at a data rate of 54 Mbit/s. The transmitter power is between 15 and 20 dBm. The devices which support various management and safety functions are designed for a temperature range of -33°C to 55°C meet the requirements of protection class IP65 and have an overvoltage protection. This makes the BAT 54 system optimally suitable for use outdoors.

The WLAN system provides a radio line according to either a or bg standard for a point-to-point connection via bridge mode. In addition, point-to-multipoint connections can also be implemented in which the BAT 54M serves as a master and the BAT 54 as a slave.
For linking up to the local network, the devices have a 10/100 BASE-T/TX-Port for M12 Ethernet connectors which is designed for both a half-duplex and full duplex transmission. The security mechanisms include an access control according to IEEE 802.1x besides other features. In addition, the data can be encrypted with WPA (WiFi Protected Access), AES (Advanced Encryption Standard) or WEP (Wired Equivalent Privacy). For diagnostics and configuration, the devices support SNMP, Telnet and CLI (Command Line Interface). 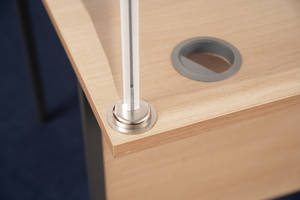