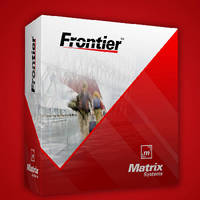 Frontier 2010 is a comprehensive and scalable security solution that provides real-time monitoring of access doors and alarm points for local and remote locations. Frontier can be configured for virtually any size installation-in the transportation, business, education, government, industrial and healthcare industries.

Schlage wireless lock systems provide the same online, real-time capabilities as wired systems-such as access privilege changes and audit records that are available at the central control terminal-all from a common database, which simplifies data entry/management.

Also new in Frontier 2010 is a wizard-based import/export capability that allows users to customize data formatting, data fields and the amount of data that is transferred. The wizard is compatible with most popular personnel data software formats that human resources, IT, law enforcement, security and other professions use.

The cutting-edge graphics technology that debuted in Frontier 2009 is further enhanced in Frontier 2010. Users can now import background raster images such as JPG, BMP or TIFF files and combine them with imported native vector images such as CAD or custom-drawn images that are totally editable within the software. Additionally, a user can import a three-dimensional CAD drawing of a facility's floor plan, which details doors, alarm points and other access control features, and overlay it onto a satellite image of the location and surrounding grounds for a total security overview.

Frontier 2010 is compatible with Microsoft® Windows® 2003 Server, XP, Vista, and Windows® 7 as well as SQL Server 2005 and Crystal Reports XI. Frontier is an open architecture program utilizing an ODBC-compliant database that allows access by a multitude of third-party programs and interfaces.

About Matrix: For more than 30 years, Matrix Systems has secured people, property and information throughout the world. Our turnkey security management solutions are built to withstand the rigorous physical and procedural demands of any organization size and type. Matrix Systems' open architecture design standards allow seamless integration with digital video, visitor management and many other products that comprise a total physical security environment. Through expert installation, training and technical support, Matrix Systems offers a level of customer service unparalleled in the security industry. For more information on Matrix Systems, please visit www.matrixsys.com or call 800-562-8749 x4490.
Share