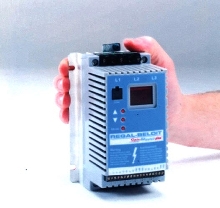 WAUSAU, WI - Marathon Electric Manufacturing Corporation, a subsidiary of REGAL-BELOIT CORPORATION, has just introduced SpinMaster(TM) and SpinMaster(TM) Plus AC micro drives. SpinMaster(TM) is for simple speed control applications, soft starting or reversing operation. The SpinMaster(TM) Plus offers more advanced features such as 18 isolated inputs and outputs plus RS485 Modbus interface. Available from stock in ¼ HP to 25 HP, these drives compliment the new microMAX(TM) inverter duty line of motors that recently earned Marathon Electric a prestigious "Product of the Year" award. Together the new SpinMaster(TM) drives and microMAX(TM) motors provide a cost-effective solution for variable speed applications such as fans, pumps, conveyors, and packaging equipment.

Marathon Electric has been a leader in providing AC Variable Speed motors that are performance matched with all current technology drives. Our motors have earned a reputation for excellence in performance and quality with all major drive manufacturers.

Marathon Electric manufactures and markets one of the widest lines of AC and PMDC motors on the market today, from 1/12 through 1000 horsepower, in Open, Totally Enclosed and Explosion Proof enclosures. A subsidiary of Regal-Beloit Corporation, Marathon Electric operates nine manufacturing plants, with sales and service offices around the globe. Other products available from Marathon Electric include AC synchronous generators, terminal blocks and fuse holders.