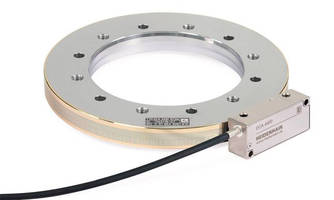 SCHAUMBURG, IL – For over a decade, HEIDENHAIN has offered the ERA 4000 incremental ring encoder that has proven very successful in many industries and applications such as machine tool rotary tables, semiconductor wafer motion stages, and robotics to name a few.  Now with new design features that enable it for use in angular motion feedback, the next generation of this encoder is introduced, the ECA 4000 which includes absolute technology.

The new mechanically-compatible ECA 4000 series comes in a wide range of outer diameters ranging from 104mm to 560mm so that machine designers can pass through cabling and other items through the center of the ring to streamline their design. Each ring has the well-known three-point centering method, which allows the installer to locate the center of the drum to the center of the machine bearing within just a couple of minutes. Then a shim or separately ordered plastic mounting tool is used between the reader head and drum to make the appropriate scanning gap, a quick check with the PWM 20, PWT 100 or other HEIDENHAIN diagnostic tool to verify signal quality, and the whole encoder system is ready for feedback to the control, via the high speed serial interface Endat 2.2.

Each ring size has a unique line count on the outer diameter and an associated accuracy. For the largest ring diameter, an accuracy of +/- 1.5 arc seconds is specified for the graduation, and each ring is capable of resolutions to sub 0.01 arc seconds, all with high RPM potential. The two-track graduation design is also highly resistant to contamination like dust, fingerprints and scratches.

The ECA 4000 ring encoder series already has an upgrade planned for 2016 where Functionally Safe rings and scanning units are in development for those machines requiring Functional Safety criteria.

For more information, contact HEIDENHAIN’s Product Manager Kevin Kaufenberg at (847) 490-0387 (kkaufenbergi@heidenhain.com) or write to us at HEIDENHAIN CORPORATION, 333 E. State Parkway, Schaumburg, IL  60173.  HEIDENHAIN can also be accessed directly via our web site at www.heidenhain.us.