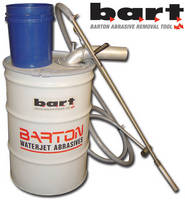 Glens Falls, NY - Barton Mines Company, the leading supplier of waterjet abrasives and waterjet replacement parts has introduced the first truly convenient, inexpensive and totally portable abrasive removal system available to the waterjet industry. "Known as BART, the Barton Abrasive Removal Tool is a solution that addresses the shortcomings of traditional methods of waste garnet removal," stated R. Joseph Ahrberg, Vice President of Sales. With removal rates in excess of 2,000 lbs. per hour, waterjet operators will realize a significant savings in the time and money invested in waste abrasive removal using BART. Powered by a common pressure washer, the durable stainless steel BART Wand is designed to fit between the table slats and can be operated while the waterjet is running, reducing downtime. The BART system is easy to operate and can be used on multiple machines. BART eliminates the need for exhaustive shoveling, expensive pumping and costly downtime by removing the spent media in a quick and efficient manner. U.S. and foreign patents pending. Please visit www.barton.com/BART to view a demonstration video. For more information contact Barton Mines Company by e-mail at info@barton.com or phone 800-741-7756. A family owned business for five generations, Barton Mines Company was founded in 1878. Barton Mines is the world's largest producer and distributor of industrial garnet grains and powders.