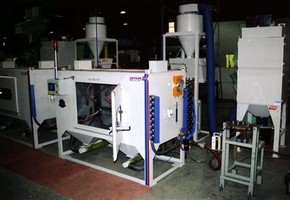 
June 5, 2006 - Saratoga Springs, NY - Guyson Corporation has developed a pass-through blasting machine for gritblast descaling and surface preparation of band saw blades and continuous strip. The manufacturer claims the custom automated blast system can produce a uniform condition on all surfaces of the material.

Inside the rubber-lined cabinet, eight suction-blast guns are rigidly mounted on multi-adjustable telescoping brackets that allow positioning at the correct angles and distances for complete 360-degree coverage of the work. When narrow strip is to be processed, extra guns can easily be turned off to conserve compressed air. Individual blast pressure regulators enable fine adjustment of the blasting intensity.

The mineral grit abrasive is collected in four hoppers at the bottom of the blast chamber and conveyed pneumatically to the cyclone separator media reclaimer via thick cast urethane ducting. The intake elbow, body and cone of the cyclone reclaimer are also lined with urethane rubber, one of the most abrasion resistant materials available. Other special abrasion resistant features of the continuous-duty blast system are urethane media delivery hoses, bronze-bodied blast guns and boron carbide lined blast nozzles.

Electronic sensors and up-to-date controls enhance the functionality and user-friendliness of the dryblast processing system. Level sensors in the media delivery system detect when the supply of grit is low, and this triggers automatic replenishment of the media from a storage hopper. A low media level in the storage hopper itself triggers a fault indication well in advance of the time that the steady flow of grit to the blast guns could be interrupted.

Inadequate pressure in the compressed air supply to the machine or insufficient air flow in the media reclaimer and dust collector are also sensed, resulting in a fault indication. A rotating beacon light summons an attendant in the event of a fault, and the touch-screen panel enables quick identification of the problem through graphics and text prompts.