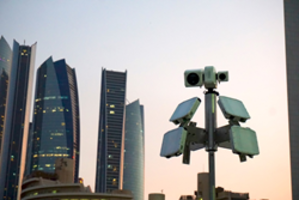 A3000 Solid State Radar used for detecting and tracking drones like DJI Phantom and can protect an aerial perimeter of greater than 85 football fields. Suitable for commercial and military applications for protecting incursion against land and sea, radar consumes a power of 20 W and can be mounted on existing infrastructure.

“The FAA’s projection of 7 million drones by 2020 makes the task of providing perimeter security a three-dimensional problem with potential threats coming from the land, sea or air,“ states Logan Harris, SpotterRF CEO. “The cost-effective SpotterRF A-series provides flexibility to address this challenge, reducing installation and maintenance costs when compared to traditional radar.”

The A3000 provides drone detection and tracking for even a small hobby drone (ex. DJI Phantom) and protects an aerial perimeter greater than 85 football fields. Because each radar is about the size and weight of a small textbook, takes less than 20 Watts of power, and mounts on existing infrastructure, these radar sensors can be distributed through a complex urban environment, while still providing complete coverage above and below the horizon.

SpotterRF radar is currently used in commercial and military applications to protect against incursions by land and sea, and more recently aerial intruders, including drones (UAV). The A-series provides protection to address the explosive growth in the drone industry.

SpotterRF delivers its award-winning compact surveillance radar (CSR) systems through more than 60 strategic integrators to a global marketplace in 24 countries on six continents. SpotterRF will be at ASIS conference in Dallas on September 25-28 in booth #601.

SpotterRF provides protection beyond fences with the world’s most advanced Compact Surveillance Radar (CSR) system for perimeter security and force protection. Made in the USA and engineered for extreme conditions, SpotterRF technology is the most compact, lightweight, energy efficient, and cost-effective radar for elite warfighters and critical infrastructure requirements, such as electrical utilities. For a more information visit https://spotterrf.com/commercial-products/