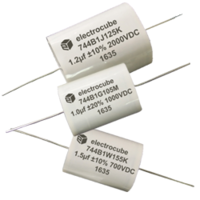 New Yorker Electronics is now stocking the new Electrocube 744B Series of Metallized Combination Capacitors IGBT Snubber. The 744B Series is part of a designated line of film capacitors specially designed and optimized for high current applications subject to AC and pulsing signals.

This film capacitor series offers high frequency operation and stability in a miniature package able to handle high surge currents without degrading. It’s a rugged, non-inductively wound metallized capacitor with flame-retardant polyester outer wrap and a flame-retardant epoxy endfill. The 744B Metallized Combination Capacitors IGBT (Insulated Gate Bipolar Transistor) Snubber has a temperature range of -55°C to +85°C at its rated voltage and an insulation resistance of greater than or equal to 30Kmeg X µf, NTE 100Kmeg. Dielectric voltage tests show it will withstand 200% of DC rated voltage for a period not exceeding one minute at 25°C.

They are designed for high current applications such as in avionics, wind generation and other high power applications however other applications include pulse, filter circuits and audio amplifiers, speakers and musical instruments.

• Protective clear wrap offered on all wrap and fill units

New Yorker Electronics is a certified franchised distributor of electronic components, well known for its full product lines, large inventories and competitive pricing since 1948. New Yorker Electronics is an AS9210 and ISO 9001:2008 certified source of capacitors, resistors, semi-conductors, connectors, filters, inductors and more, and operates entirely at heightened military and aerospace performance levels. It also functions in strict accordance with AS5553 and AS6496 standards — verifying that it has implemented industry standards into everyday practices to thwart the proliferation of counterfeit parts. It is a member of ECIA (Electronics Component Industry Association) and of ERAI (Electronic Resellers Association International).