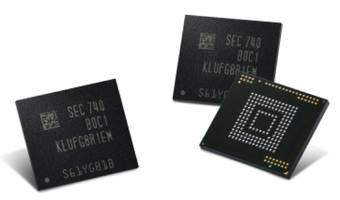 "The new Samsung 512GB eUFS provides the best embedded storage solution for next-generation premium smartphones by overcoming potential limitations in system performance that can occur with the use of micro SD cards," said Jaesoo Han, EVP of memory sales and marketing, Samsung. "By assuring an early, stable supply of this advanced embedded storage, Samsung is taking a big step forward in contributing to timely launches of next-generation mobile devices by mobile manufacturers around the world."

Consisting of eight 64-layer 512Gb V-NAND chips and a controller chip, all stacked together, the 512GB UF doubles the density of firm's previous 48-layer V-NAND-based 256GB eUFS, in the same amount of space as the 256GB package. The eUFS' increased storage capacity will provide a more extensive mobile experience. For example, it enables a flagship smartphone to store approximately 130 4K Ultra HD (3,840x2,160) video clips of a 10-minute duration,* which is about a tenfold increase over a 64GB eUFS which allows storing only about 13 of the same-sized video clips.

To maximize the performance and energy efficiency of the new 512GB eUFS, the company has introduced a new set of proprietary technologies. The 64-layer 512Gb V-NAND's advanced circuit design and new power management technology in the 512GB eUFS' controller minimize the increase in energy consumed, which is particularly noteworthy since the new 512GB eUFS solution contains twice the number of cells compared to a 256GB eUFS. In addition, the 512GB eUFS' controller chip speeds up the mapping process for converting logical block addresses to those of physical blocks.

The 512GB eUFS also features sequential read and writes reaching up to 860MB/s and 255MB/s respectively, the 512GB embedded memory enables transferring a 5GB - equivalent full HD video clip to an SSD in about six seconds, over eight times faster than a typical microSD card.

For random operations, the new eUFS can read 42,000 IO/s and write 40,000 IO/s. Based on the eUFS' rapid random writes, which are approximately 400 times faster than the 100 IO/s speed of a conventional microSD card, mobile users can enjoy seamless multimedia experiences such as high-resolution burst shooting, as well as file searching and video downloading in dual-app viewing mode.

On a related note, Samsung intends to increase a production volume for its 64-layer 512Gb V-NAND chips, in addition to expanding its 256Gb V-NAND production. This should meet the increase in demand for advanced embedded mobile storage, as well as for premium SSDs and removable memory cards with high density and performance.