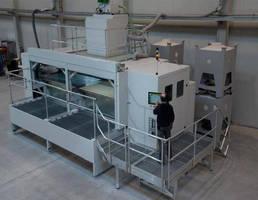 NORTH HUNTINGDON, PA — The ExOne Company (Nasdaq: XONE), a global provider of three-dimensional printing machines and printed products to industrial customers, today announced the upcoming availability of its largest 3D printing system, the Exerial™. The Exerial system demonstrates a considerable evolution in ExOne’s machine portfolio as the new printer allows customers to engage with the indirect printing technology for industrial series production, beyond the rapid prototyping and small batch production for which the company’s other systems are currently being used. ExOne will formally debut the Exerial machine at the GIFA International Foundry Trade Fair in Düsseldorf, Germany, on June 16-20, 2015.

“ExOne’s industrial customers are pressing for latter stage technology to address their production needs with a 3D printing system that supports higher volumes and automation for the industrial production environment. When the Exerial system rolls out this year, ExOne will have addressed the industrial-level solution, further separating binder-jetting as a more cost effective technology than other 3D printing solutions,” said S. Kent Rockwell, Chairman and Chief Executive Officer for The ExOne Company. “While our machine R&D focus in 2014 concentrated more intently on this type of customer base, ExOne continues to address the growing needs of our rapid prototyping and low volume production customers with further improvements in our existing machine portfolio platforms – the S-Max™, S-Print™ and M-Flex™ – and through the development of additional binder sets and printing materials.”

The Exerial is unique compared to ExOne’s other indirect printing systems in that it contains multiple industrial stations that allow for continuous production and simultaneous processing. The Exerial is distinctly equipped with two job boxes, each 1.5 times larger than the single job box in ExOne’s next largest model, the S-Max. Notably, the Exerial system offers a total build platform of 3,168 liters and is expected to be capable of printing output rates nearly four times faster than the S-Max. The Exerial utilizes a new recoater system, multiple print heads and automation controls. As part of the development of the Exerial, the company has filed five patents related to machine design elements.

“We are investing in the latter stages of our R&D process for the Exerial as we respond to an initial purchase order of four machines,” said Rainer Hoechsmann, Chief Development Officer for The ExOne Company. “We expect to deliver the first beta machine and then the other three machines over the course of the first three quarters of this year, with additional commercial availability likely at the end of 2015 or early 2016.”

Employing ExOne’s binder jetting technology, the Exerial utilizes its multiple print heads to selectively dispense micro-droplets of specially-engineered binder into very thin layers of powdered material inside each of the two job boxes. Within the world of additive manufacturing, ExOne is distinctive in that it offers solutions that are focused on industrial users and applications, and the Exerial is the latest machine to serve that market, going beyond capabilities previously offered.