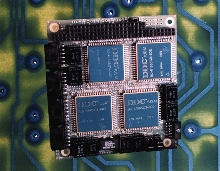 BU-65567/68 data bus interface cards for MIL-STD-1553 are suitable for military avionics and ground-vehicle applications. Both cards are supported by free software, including C library and drivers for DOS and VxWorks, which eliminate need for most low-level programming. BU-65568 has 4 dual-redundant bus controller/remote terminal/monitor (BC/RT/MT) channels. Both are 16-bit convection-cooled cards built in accordance with PC/104 specification v2.3.

"DDC is in the process of offering Enhanced Mini-ACE versions of all our 1553 single-function cards. The PC/104 form factor is used increasingly in embedded systems using MIL-STD-1553 cards, and so it was essential that we apply the latest high-performance terminal we have to offer to this format." noted Mike Hegarty, Data Bus Technologies Product Marketing Manager. The BU-65567/68 is designed for military avionics and ground-vehicle applications.

As with DDC's other, similarly enhanced cards, BU-65567/68 performance benefits stem from DDC's Enhanced Mini-ACE advanced architecture. A feature of both cards, the highly flexible RT mode offers single, double, subaddress-specific circular, and global circular buffering options-including 50% and 100% rollover interrupts. The BU-65568 also offers a BC mode with a built-in message sequence control engine with instructions for offloading the host processor; programmable and selectable monitoring based on RT address, transmit/receive bit, and subaddress; and a 32KB paging mode as well as a flat addressing mode for up to 512KB that supports numerous platforms. In addition, each Enhanced Mini-ACE terminal includes highly autonomous, built-in self-test capability for protocol logic and RAM.

Both cards are supported by free software, including a C library and drivers for DOS and VxWorks, which eliminate the need for a considerable amount of low-level programming. DDC is currently shipping the BU-65568.

Data Device Corporation is an international leader in high-reliability data conversion interface components and subsystems for military and commercial applications. Established in 1964 with the introduction of the first synchro-to-digital module, DDC has design and manufacturing facilities in their Bohemia. New York headquarters and Cork, Ireland. For more information, contact Mike Hegarty at 631-567-5600. e-mail info@ddc-web.com. or connect to www.ddc-web.com.
Share