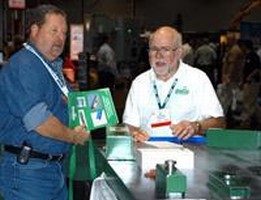 2007 Manufactured Concrete Products Exposition (MCPX) featured 121,400 net sq ft of exhibits, with 282 out of 384 exhibitors featuring precast products. There were 6,700 attendees, and 1,200 seats were filled in NPCAs extensive series of precast-specific courses. According to Ty E. Gable, president of NPCA, such strong representation for precasters and their suppliers can be seen as an indicator of growth for the coming year.

Precasters Do Record Business at MCPX


With a record number of attendees and the largest trade show floor in its five-year history, the 2007 Manufactured Concrete Products Exposition landed in Orlando Feb. 22-24 for three days devoted to trying, buying, selling and the latest equipment, products and services for the precast concrete industry.

The largest MCPX in the five-year history of the event featured 121,400 net square feet of exhibits, 69 percent of which was devoted to precast products. Of the 384 exhibitors, 282 (74 percent) featured precast. Attendance figures also proved to be the best ever, with 6,700 attendees, an estimated 65 percent of whom were from the precast sector of the industry. It was also the biggest year yet for precast education, with more than 1,200 seats filled in NPCA's extensive series of precast-specific courses.

Such strong representation from precasters and their suppliers can be seen as an indicator of the coming year, according to Ty E. Gable, president of NPCA, which sponsors the show along with four other manufactured concrete products associations.

"The overwhelming success of this year's show tells us that the precast sector of the concrete industry is thriving," Gable said. "Precast manufacturers attended this show in record numbers because they are anticipating a strong year. They're looking for equipment, bringing their employees to our education courses and are generally optimistic in their outlook for 2007 and beyond."

While NPCA is forecasting overall growth in the construction industry of 1 percent for 2007, the precast sector is expected to outpace 2006 overall construction by more than that because of strong growth in transportation and commercial building.

"The diversity of our product lines helps to keep the precast sector more recession proof than other sectors of the construction industry," Gable said. "The fact that precasters are making significant equipment purchases this year sends a good signal that the precast sector is healthy and growing."